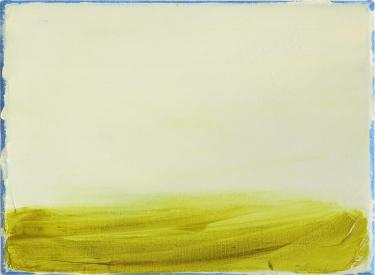 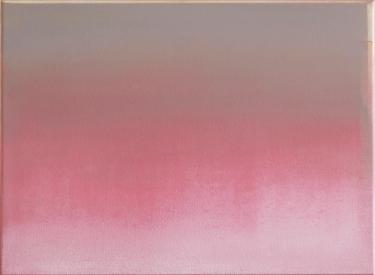 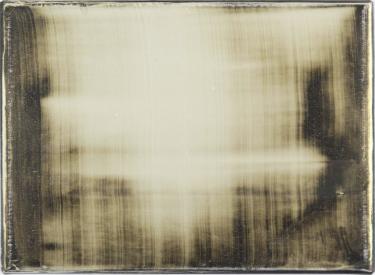 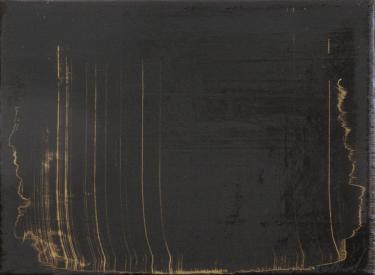 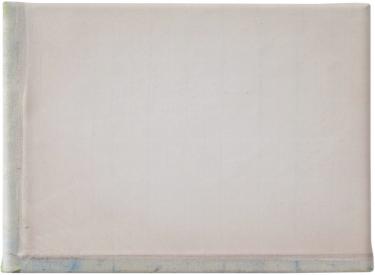 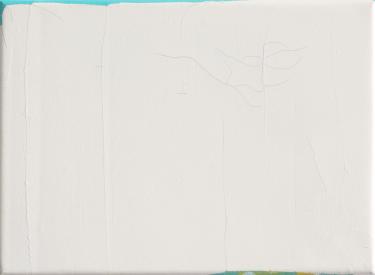 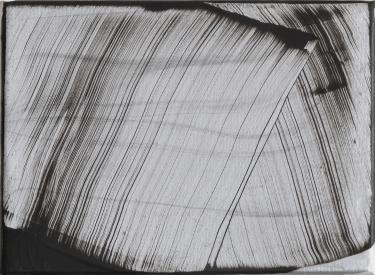 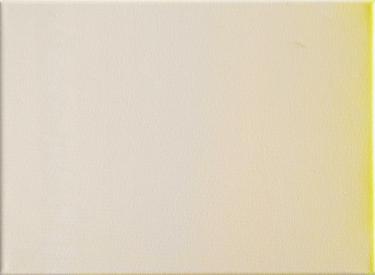 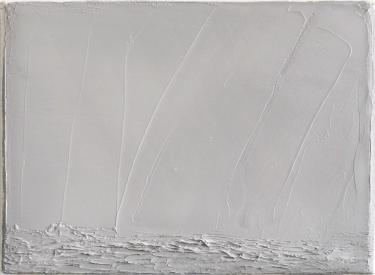 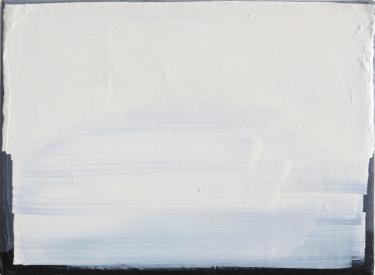 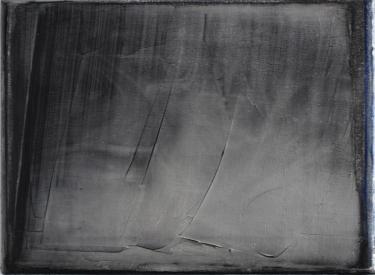 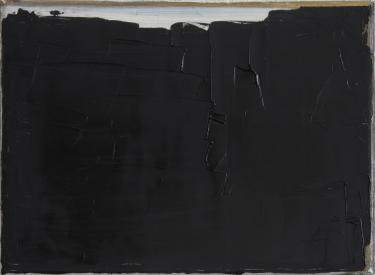 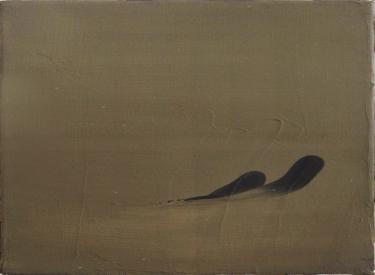 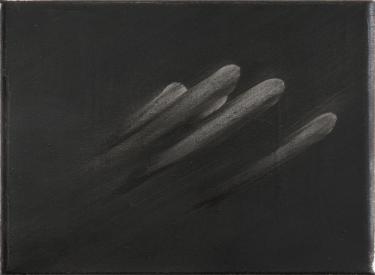 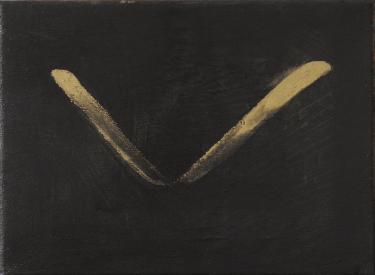 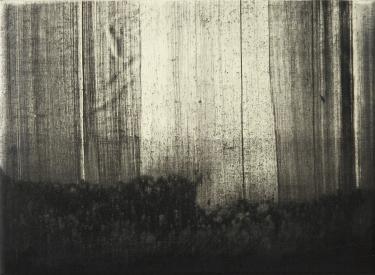 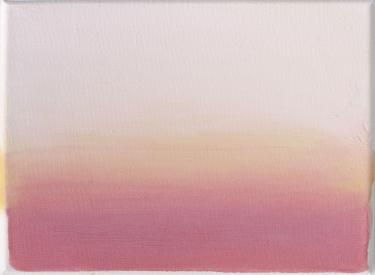 Extracts of a conversation on 6 December 2013 between Sarah Merten and Karin Schwarzbek at the artist‘s studio.

Sarah Merten: What are some of the issues on your mind just now?

Karin Schwarzbek: One of them is what I call landscape concepts. The canvas and its edges simultaneously address the horizontal aspect and the pictorial space. For some time now I‘ve also been thinking about the body. By this I mean both the clothed body and the painting as a three-dimensional object. But as I‘ve been working I‘ve come to realise that it‘s impossible to attribute only one approach to my pictures. There is always some convergence, which means that subject areas interrelate with each other that are also very much at issue in the history of painting.

SM: By using terms such as ‚body‘ or ‚landscape‘, you talk of concrete visual images. But in your works I can see none of the things I would traditionally associate with them. Do you, then, transfer to the canvas your inner notion of landscape or body?

KS: When I say ‚landscape concept‘, that‘s not a picture but an idea. In that sense I don‘t depict a landscape. As for ‚concept‘, I‘m thinking more of working on memories of images that surface during the working process. When I notice that the right ‚degree‘ of landscape has been reached, I leave the painting alone.

SM: It takes very little to reach that degree. A single horizontal line already conveys the principle of landscape.

KS: Just as some paint in the foreground, for example, immediately takes on a shape without wanting to simulate a body. You could say that these are intrinsically painterly, intrinsically visual principles that no longer serve the purpose of depiction. I don‘t even want to address landscape – that‘s going too far already. First of all, I want to act in a painterly context. How does colour behave in the pictorial space? Colour fields push into the foreground and then recede again. The way colour manifests itself is always in flux. That‘s why I‘m interested in painting. As for the body, I would like to add that I‘m increasingly thinking of my paintings in three-dimensional terms.

SM: I always have to be mindful not to read too much concreteness into your paintings. The quality of your works resides in the fact that, while remaining open, any individual painting also contains all the traits we have mentioned. I can include this proposition in what I observe, but should be wary of wanting to read something into the image myself.

KS: That‘s why I don‘t use titles. I think a name or a narrative description is the wrong approach. Instead, my paintings should facilitate a painterly experience. In that sense, I agree with you that they contain a great degree of openness. The same openness that I bring to the painting while I paint. I don‘t begin by defining what the canvas is to show. Nevertheless, my paintings are not arbitrary but, in and of themselves, very precise and, in a certain sense, concrete as well. I believe that only in this way can they become available for narrative. That it‘s only then, for example, that the characteristics of skin, or a body or space will reveal themselves.

SM: In this context the notion of validity seems to be key. How do you know when a painting has achieved validity – one could also say, that it‘s ‚finished‘?

KS: As soon as a painting surprises me, it signals to me that I now have to stop. Usually, that moment arrives rather sooner than I would actually like. I often reflect on that only much later. Another criterion for whether a painting will remain valid is whether it is able to leave my own personal context to reach an autonomy of its own. Only then can I exhibit a painting. Actually, however, I notice fairly soon whether a painting will be good. But then I don‘t want to let it go straight away. I‘ll keep it in my studio as a kind of benchmark for the other paintings.

SM: So, are valid paintings also the ones that facilitate the painterly experience you mentioned earlier? And what exactly does that mean, to you?

KS: To be looking at a painting is a spatial experience. My intention is not to elicit anything specific in you as the beholder. That would be too teacherly. What I call a ‚painterly experience‘ occurs neither in the painting, nor in you, but in the space between the two of you. There‘s something magical about that space because it‘s where dimensions are shifting. At the same time, the pictorial space may be very deep even though, strictly speaking, what‘s in front of you is simply an object covered in a coat of paint.

SM: In comparison to your earlier works, in which the human figure played a greater role, I no longer feel that when you apply paint you place something onto the canvas. On the contrary, it seems to me that, with each additional layer of paint, you actually remove something. It‘s a kind of archaeological approach. You push further into a space you didn‘t know before and which opens itself as you apply the paint. At the same time, your canvases have grown steadily smaller, which I take to be a token of your precision.

KS: What‘s great about a small painting is that it really becomes an object whose edges matter. It becomes a piece of bling. Despite its openness, it‘s autonomous; it makes a statement. The painting toys with the notion of being a valuable object. I actually mean ‚bling‘ in a very loving way. That‘s Austrian humour for you, which in fact is very, very serious indeed.