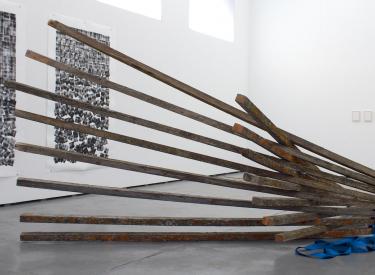 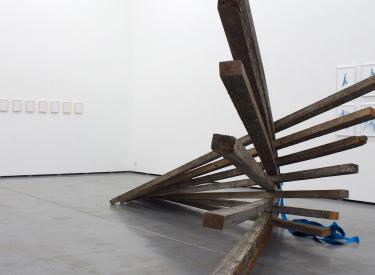 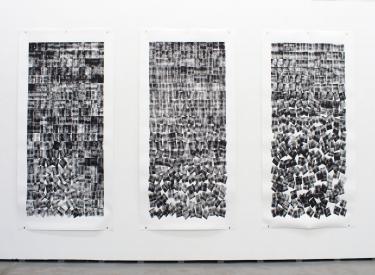 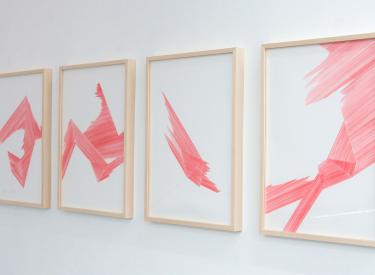 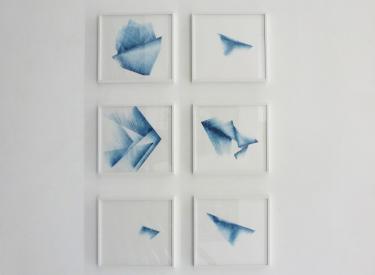 The Galerie Bob Gysin is pleased to present the first solo show of Zurich based artist Christoph Brünggel.

The groups of works, which appear disparate at first glance, revolve around the polarities of formation and disintegration, of chaos and order. Making time – the most fleeting dimension of all – visible is also given a primary focus in the work of Christoph Brünggel. As a result, he always views his own works as reservoirs and places of remembrance as well.

The installation How to Completely Disappear is composed of old fence rails twisted and shaped by the weather. Transformation and weathering are directly visible on the minimalistic structure. Transitoriness is literally brought to a point through the arrangement of the rails and intensifies in a vanishing point, becoming a paradox of fascicled disintegration.

The relationship between chaos and order forms the starting point of the three large-format works on paper. The precise geometric order of the squares at the upper edge of the picture begins to dissolve in varying degrees, ending in supposed chaos at the bottom of the picture. The inspiration for the composition is the Schotter computer graphic by Georg Nees, a mathematical algorithm from the 1960s. It is the result of the structured use of random generators to create images.
Brünggel‘s work often incorporates an element of sound as well. In his work for III, the artist employs an excerpt, „When I die 1,000 birds will fly out of my mouth“, from the lyrics of a song by the hardcore band Orchid. Using a mechanical typewriter, he typed it onto eleven 5x8-inch sheets of paper, layering the letters on top of each other. The performative act of „hitting the keys“ refers to the beat of the song and condenses itself into small, black rectangles. The actual text, on the other hand, disintegrates and takes on a solid form as a cipher-like substitute of the text‘s meaning. Another of the artist‘s sound-based works includes the sonification of a flock of birds. for IV deals with structures and flock formations of birds and translates these into abstract, synthetic sounds.

The Yangon Fades series composes an additional part of the Aus der unmittelbaren Unwirklichkeit picture cycle and is based on previously discovered photo material. In an old hotel in Rangoon (Myanmar), the artist came upon the souvenir photos left behind in the hotel by primarily Burmese tourists. Due to the extreme humidity, the photos have already decomposed to such a degree that the subjects of the pictures are barely discernible. The photography on its own no longer fulfills its role as a classic souvenir picture. The disappearance of the motifs through decomposition, however, opens up the expansive field of imagination and interpretation. 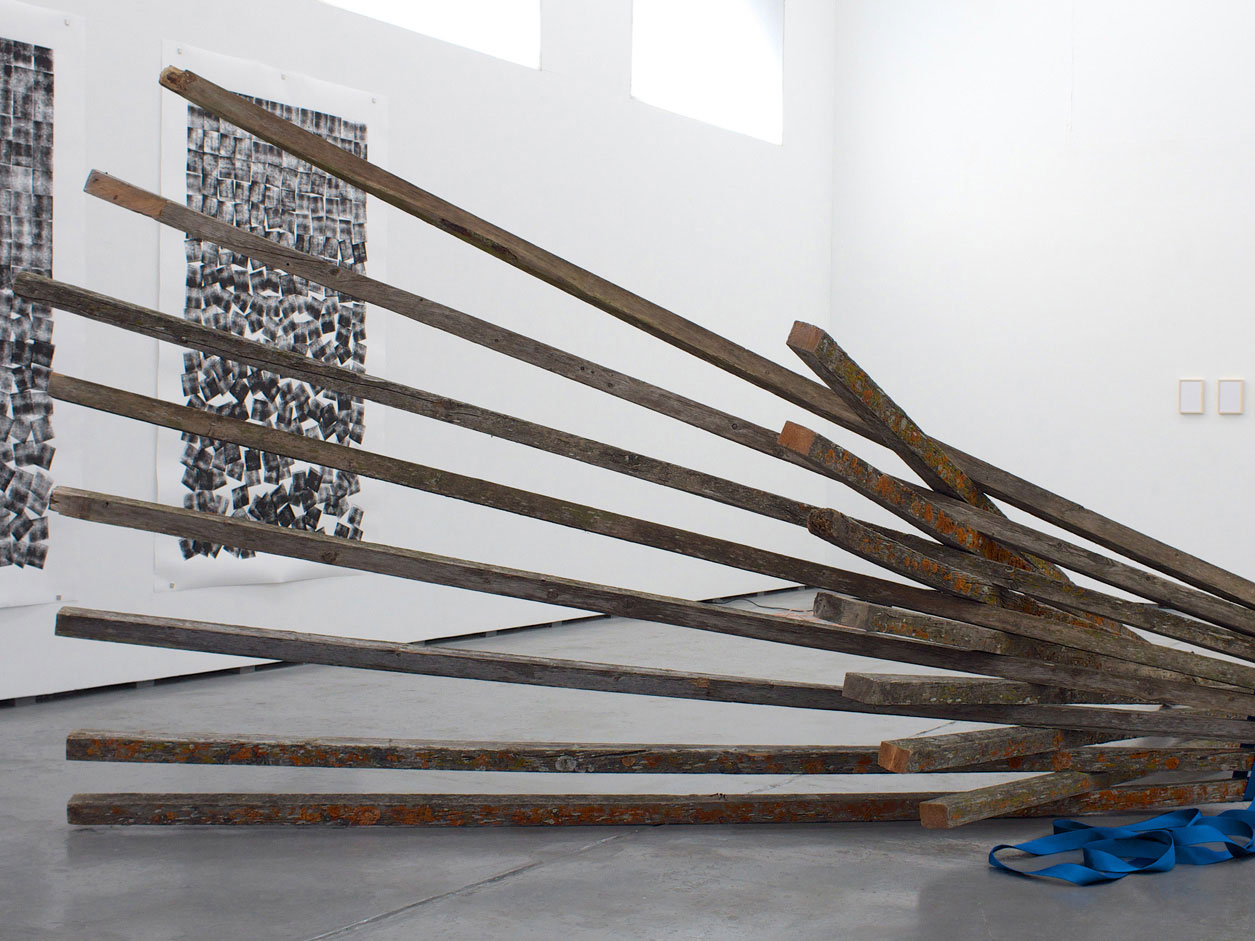 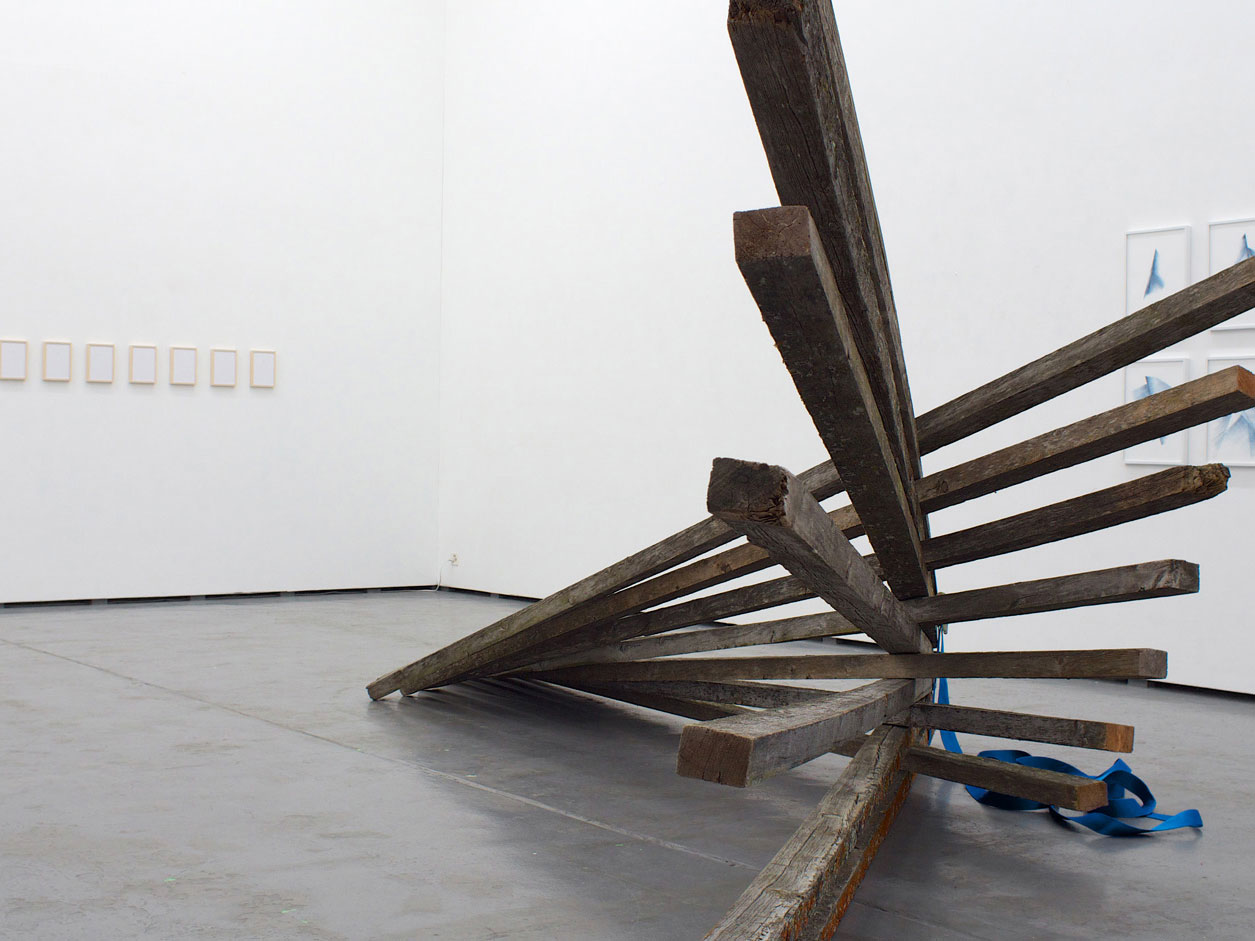 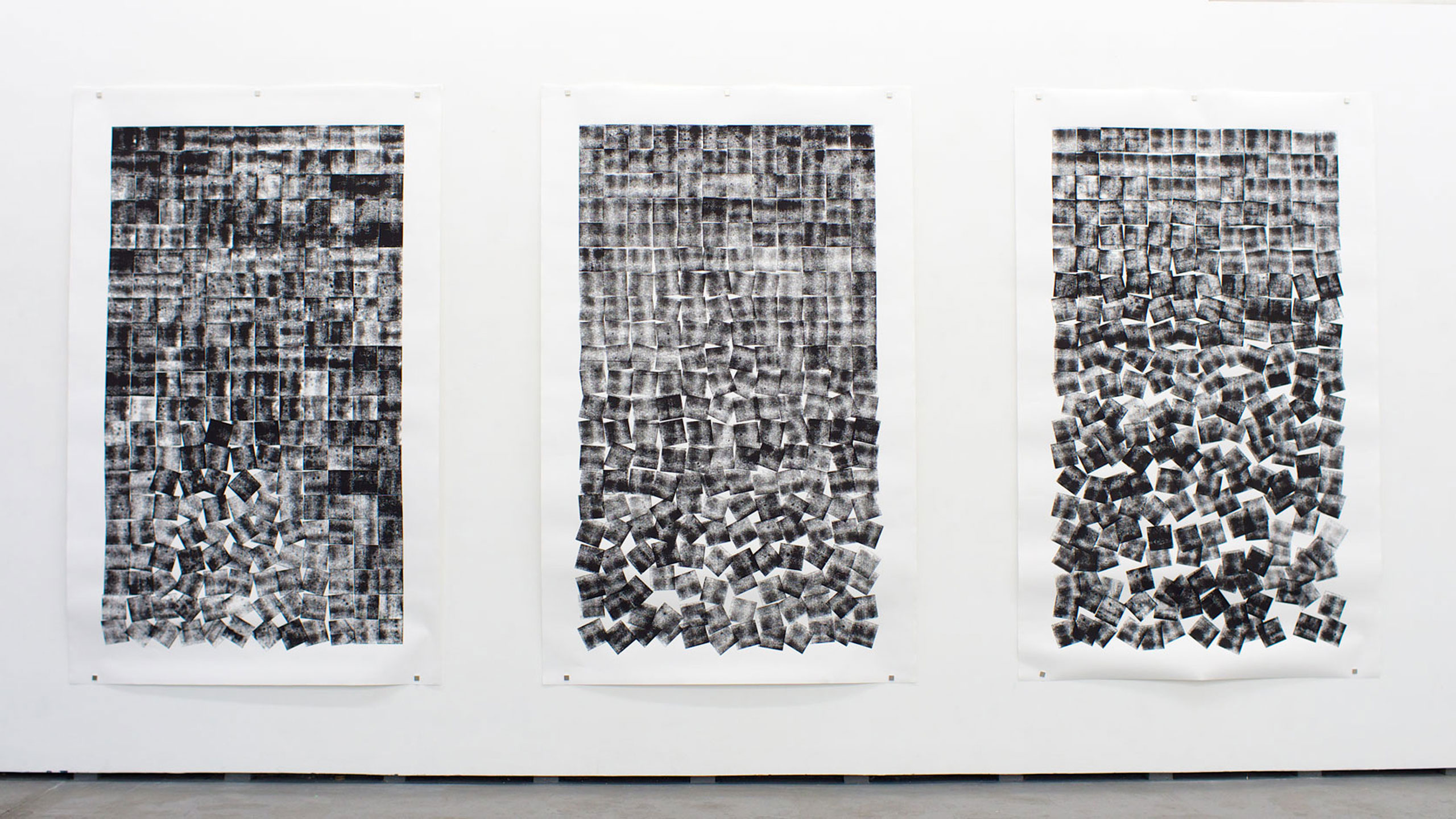 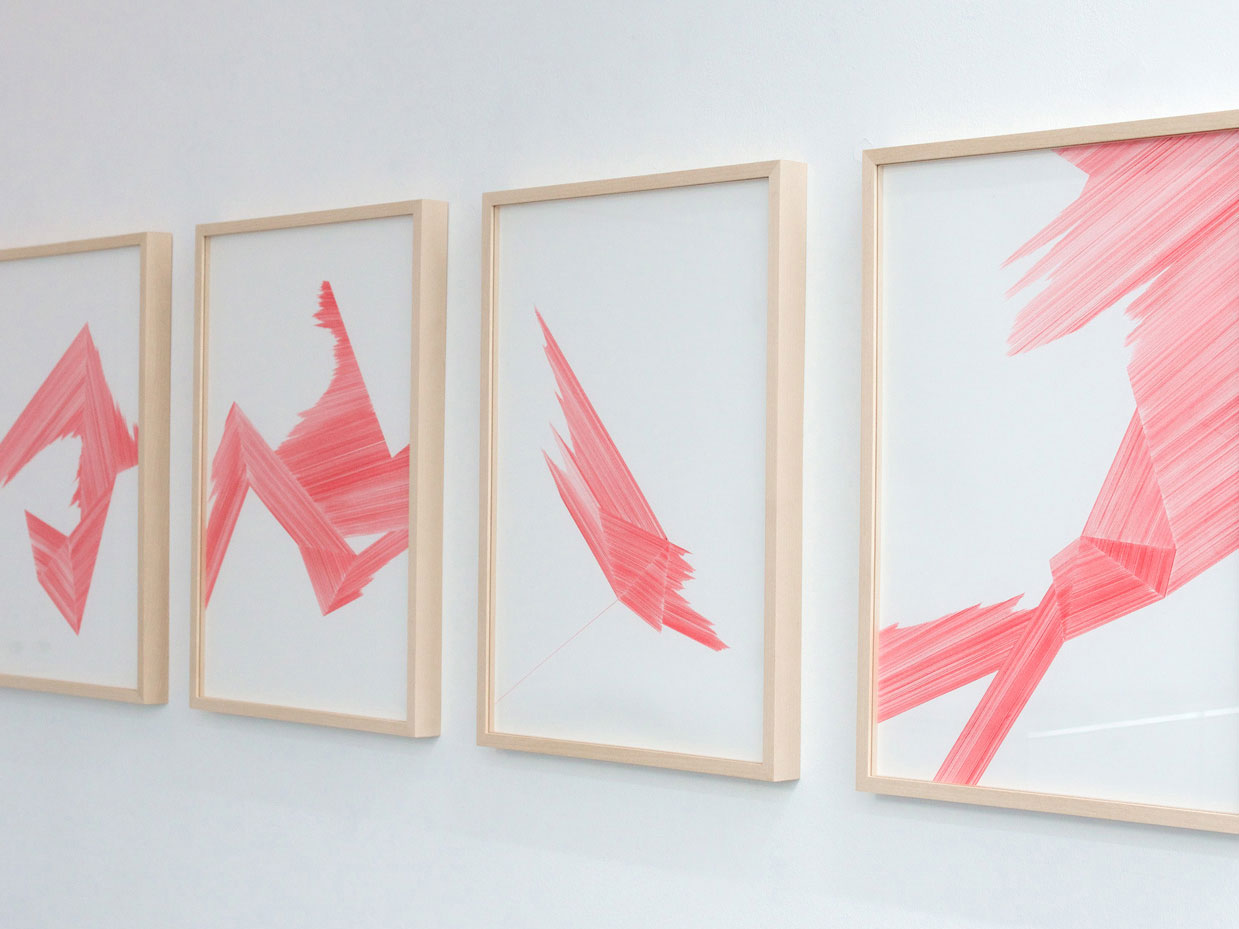 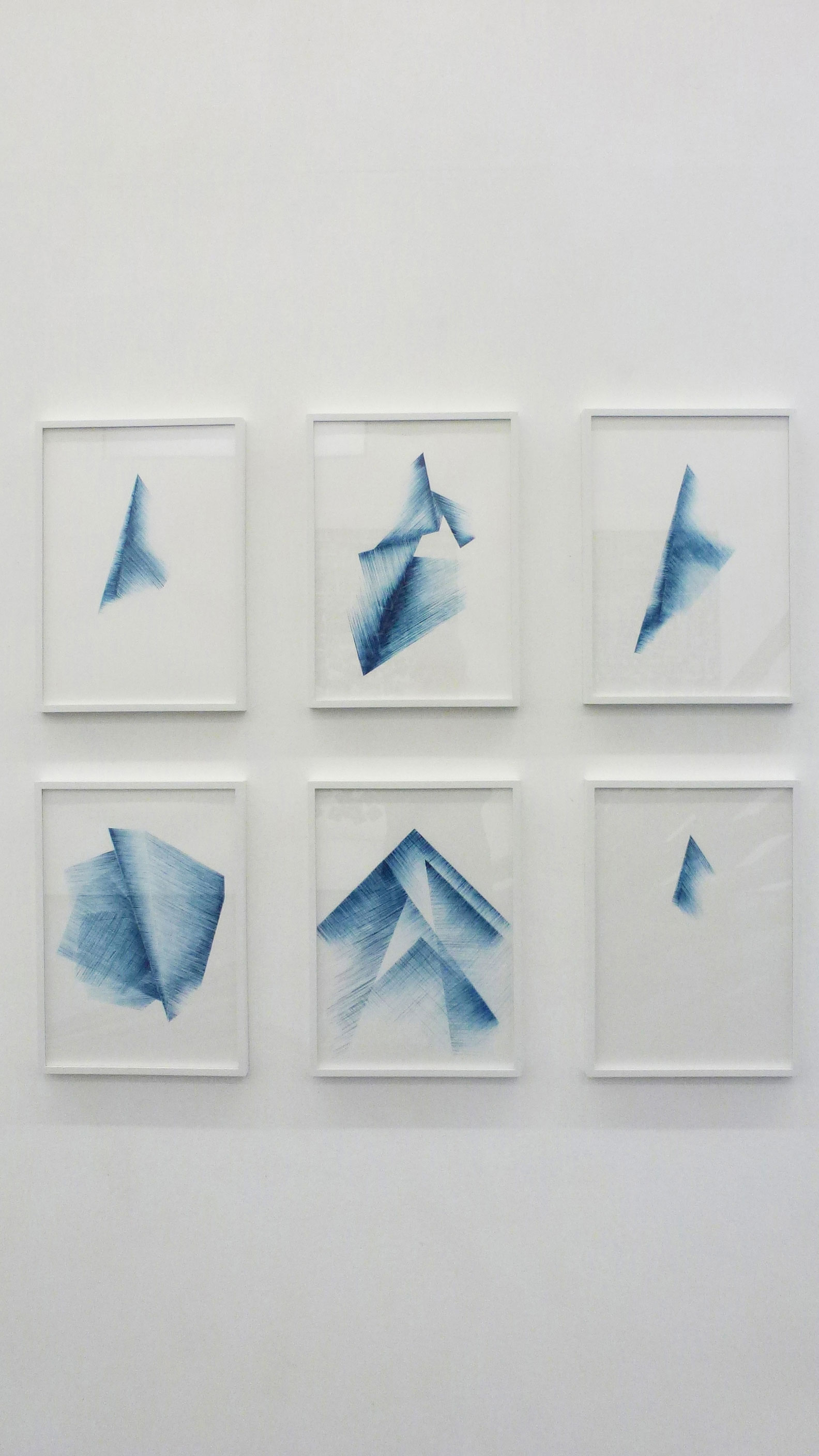 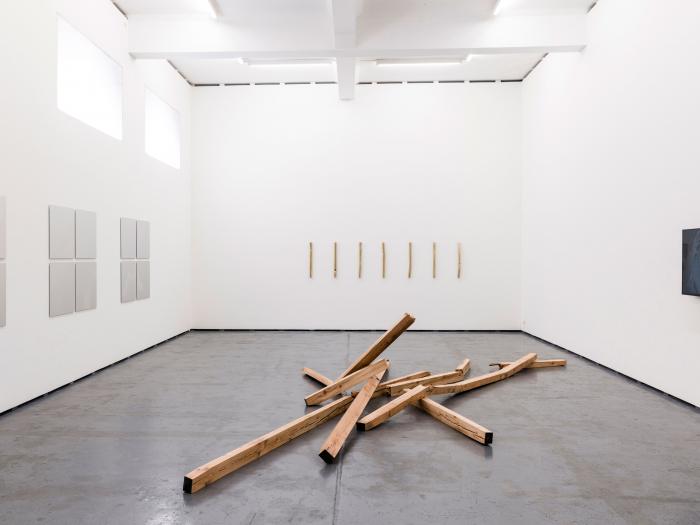